On Sunday 8th December 2013, Mary Poppins was welcomed back to her “birthplace” in the Australian town of Bowral where the author P.L. Travers lived as a child and teenager and a century after the character of the famous flying nanny first emerged in her imagination and storytelling.

Appropriately, the fictional character of Mary Poppins is now immortalised in the town she was created as the finale event in Bowral’s sesquicentenary (150th) celebrations with the unveiling of an exquisite life-size bronze statue. Mary Poppins is now a “permanent resident” of Bowral in Glebe Park, adjacent to the Bradman International Cricket Hall of Fame and Museum, only a block from the cottage in Holly Street where her family lived from 1907 – 1917.

The statue was crafted by well-known sculptor Tanya Bartlett, who was also responsible for the nearby statue of Sir Donald Bradman “The Final Salute” that stands in the museum’s courtyard.

The unveiling of the Mary Poppins Birthplace Statue was performed by dozens of children and supporters, sponsors and dignitaries tugging on three long ropes. The unveiling was done in the presence of the Governor of New South Wales, Her Excellency Professor Marie Bashir AC CVO, who gave the command signal by raising an umbrella.

It was a 12 year old girl, Melissa McShane, who originally suggested the statue for Bowral in 2004 and has campaigned for it in partnership with her father, Paul, for almost a decade. Melissa was given the honour of officially cutingt the ribbon around the black calico covering the sheet prior to the unveiling with the assistance of sculptor Tanya Bartlett and Rose Treadwell, the grand daughter of the late Sean Crampton, a British sculptor whose 1966 sketches for a statue proposed for Central Park in New York were used as design inspiration for the Bowral project.

The Mary Poppins Birthplace Statue was then welcomed by the singing of a Mary Poppins medley by a choir from the Southern Highlands Youth Arts Council (SHYAC) and an “umbrella dance” to the tune of the Hokey Pokey by the audience.

Other dignitaries attending with the Governor included the Hon Bob Baldwin MP Parliamentary Secretary Assisting the Minister for Trade and our local MP for Throsby Stephen Jones; the State Government was represented by the Hon Pru Goward MP for Goulburn and Mr Jai Rowell MP for Wollondilly. The Mayor of Wingecarribee Shire Clr Juliet Arkwright accepted the gifting of the statue to the community from the President of the SHYAC Allen Cupitt.

Visit these links to the photo gallery from the Southern Highlands News and the footage from HighlandsTV for how events unfolded on the day. 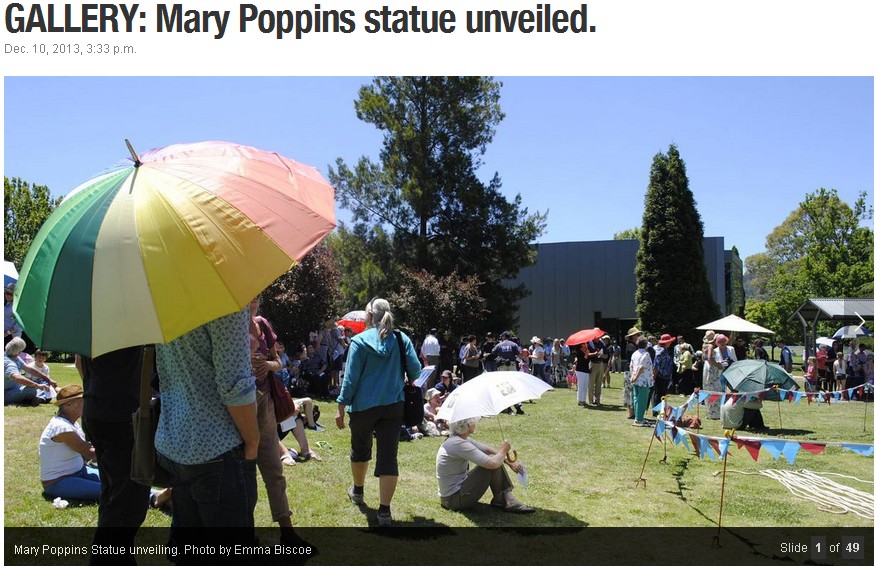