Saving Mr Banks but at some cost to the history

Melissa and I recently saw the new Disney film Saving Mr Banks and there is much to like, especially the performance of Emma Thompson as author P.L. Travers. The story of Disney’s campaign to gain the movie rights to the Mary Poppins character is one worth telling. The script does, however, appear to have skewed the historical sequence of events and invented some new episodes. That’s understandable given the demands of compressing the narrative into an entertaining movie, as it isn’t a documentary after all.

For the record, it is worth pointing out where the film departs from the history, as best we understand it, without being critical of the choices made by the scriptwriter and director for doing so. Some of those choices may, however, impact on a true perspective on Bowral’s role in the life of the author (or Helen Lyndon Goff, nicknamed “Ginty”, as she was then known), so it is justified on a  blog like this one to try and correct them.

The following points rely upon the 1999 biography Out of the Sky She Came by Valerie Lawson, whose work was acknowledged in the film’s credits (that book has since been republished as Mary Poppins She Wrote).

Helen Lyndon Goff was born in Maryborough on 9 August 1899. She left there in early 1902, at the age of about two-and-a-half years old and, it seems certain, she never ever returned. No doubt some elements of Maryborough remained in her memory all her life, and it seems she added lustre to them later, but she was a baby and toddler at best for most of the time she lived there. Saving Mr Banks incorrectly depicts her family residing in Maryborough in 1906 and then being transferred directly to Allora. According to Valerie Lawson’s research, Travers Goff was transferred (possibly demoted) to a new job with the AJS Bank in Brisbane in early 1902 and the family travelled south with him and then lived in a succession of places until moving to Allora in October 1905.

The family lived in Brisbane Street Ipswich but then Travers Goff had to relieve for another employee at Clifton on the Darling Downs near Toowoomba during August 1903 and then during May 1905 at the bank’s branch at Killarney, north-west of Brisbane. Lawson also says the family lived at ‘Heytor’, Lisson Grove, Wooloowin. Shortly after that Lyndon was sent for a time to live with her Aunt Ellie in Sydney, prior to the birth of her youngest sister Cicely Margaret in July 1905. By this time Lyndon was five years old.

Like Maryborough, Lyndon’s time living in Allora was relatively short, about 16 months. They arrived in October 1905 and left following her father’s death in February 1907. The significant difference to Maryborough was that she was older now, just having turned six, and would naturally remember more. In addition, she would remember these months more intensively later as the last period of time while her father was still alive. For her, this time in Allora came to represent the happiest year of her life, though her father’s decline must have made the final months more stressful. As Lawson indicates, there is a sense that many of her happiest memories were, perhaps retrospectively, assigned to this single period of her life as a kind of golden age.

In Saving Mr Banks, the flashback scenes to the “wild west” town of Allora are contrasted sharply to the opening scenes in Maryborough for dramatic purposes. Maryborough is depicted as a bustling  “civilised” town with European style parks and attractive houses, replete with a retinue of servants. On arrival in Allora, the family has traipsed through dry dusty paddocks to find a run-down house sitting forlornly on a hill – with no other civilisation to be seen to the horizon – and definitely no servants.In fact, the house the Goff family lived in at Allora was far from derelict being attached to the impressive bank branch premises in Herbert Street, the main street of the township,  apparently with stables and possibly servant quarters and a large backyard as big as a paddock. There were streets and buildings all around Herbert Street unlike the desolate location in the film. The family did have domestic help at the home in Allora it seems, at least a maid, a cook and a stablehand. Of course there would have been bank staff around during the week in the business premises of the building so the loneliness experienced in the film by the mother Margaret Goff seems unlikely.

The contrast between Maryborough and Allora is meant to emphasise the sudden change in circumstances of the family due to the father’s unreliability and drinking. Ironically, the change for the family really did happen in Bowral rather than Allora. Following the death of Travers Goff, all the household effects were sold at auction and the family were moved 1,000 kilometres south into a different state to a very modest cottage on the outskirts of Bowral.  This cottage was rented for them by Aunt Elle, and this time there were definitely no domestic servants. There in Bowral they were to live for a decade, the longest period the Goff family resided anywhere during  the time Lyndon lived in Australia, from about the age of seven until she was almost eighteen. It was also here in Bowral that she began to use her imagination and storytelling ability to create a character that would become an emotional response to the death of her father and the threatened break-up of her family.

#3 The mother’s attempted suicide by drowning

This scene is based on a pivotal moment in young Lyndon’s life, and the creation of the Mary Poppins character, certainly as remembered by her in later writing.  Her biographer Valerie Lawson has also emphasised its significance.

But it did not take place in Allora prior to the death of her father as depicted in Saving Mr Banks. It took place several years later in Bowral, most probably based on our original analysis of daily weather records, sometime during the period Tuesday 19th to Thursday 21 July 1910. The author later said she was a little older than either ten or eleven years when it happened. The dramatic episode did not involve Lyndon mounting a white horse and riding after her mother and then entering the creek or the lake to save her. Rather her mother appeared to have some kind of nervous breakdown in Bowral, possibly triggered by a massive rainstorm outside, and she rushed out of the house threatening to drown herself in the creek at the back of the property. Lyndon’s response was to draw her sisters in front of the fireplace, wrap an eiderdown around them and tell them a story to comfort and distract them from the crisis. Fortunately the mother returned safely of her own accord, and to the great relief of her daughters, but the relationship between Lyndon and her mother had changed forever from that point.

The character of Aunt Ellie, played by Rachel Griffiths in Saving Mr Banks, is shown as arriving in Allora to bring order and relief to the household when Travers Goff fell ill . Lawson’s biography indicates this didn’t happen but instead Aunt Ellie only arrived in Allora for the first time after Travers Goff had died, and that was to whisk the family back with her to Sydney within a few days and then eventually to Bowral to the cottage she rented for them for the next ten years. There is little doubt Aunt Ellie was probably the major archetype for the Mary Poppins character but her involvement in their lives, especially Lyndon’s, deepened after the death of the father.

The scriptwriter and director have invented this scene where Disney follows Travers to London in a last ditch attempt to secure the movie rights. Again, it is done to serve the dramatic narrative but the device does underscore Disney’s desire to land this project for his studio, even if the visit to her home didn’t happen in reality. There may be other unknown liberties taken with the facts relating to her stay in Los Angeles but to repeat, this isn’t a documentary but a  well-crafted film with an ensemble of brilliant actors who produce an entertaining and engaging story.

The Saving Mr Banks producer Ian Collie was responsible for a documentary in 2002 titled The Shadow of Mary Poppins, directed by Lisa Mathews, that eventually led to this feature-length biopic. The documentary is due to be aired again in early February 2014, possibly with some updates. The Australian team that partnered with the BBC and Disney to produce Saving Mr Banks deserves to be highly commended for bringing this story to the big screen, despite the historical shortcuts and narrative tweaks that resulted. Hopefully Bowral’s essential role in the genesis of the Mary Poppins character won’t be overlooked and other opportunities will arise in the future to highlight the part our town played. 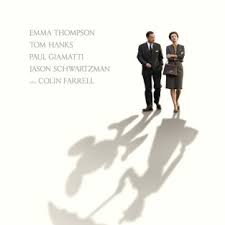